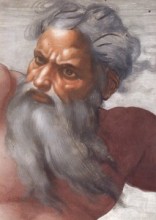 It’s easy to understand how anyone with a bit of sound reasoning and independent thinking can challenge or reject the image of God projected by religious authority and bolstered by the rituals they impose upon the faithful followers.The imbued concept of traditional religions basically portray God as a separate being; a magician who we pray to for help and a punisher of evildoers. But the image becomes blurred when observing the suffering in the world and the terrifying events that inject doubt and suspicion in those who believe blind faith to be the practice of a fool.

Over time, we have transferred our human emotions of fear and misconstrued concepts upon an emotionless God. In reality, we have created God in our image. This is due in part by the convolutions of ancient knowledge and events that served as impetus to the scriptures and church teachings. Misinterpretation of historical events has led to the dogmatic rhetoric of misinformed constituents and church authority, which exposes another problem.

Churches can only retain their wealth and power by admonishing followers to believe in this illusory image and pronouncing their authority in the name of God and by turning the bible into something more than the first official historic chronology of ancient history. (see History’s History)

It is, however, hard to understand how those with sound reasoning can expect to discover the common denominator of all life or explain the illusory reality of our existence without first accepting the premise of a higher intelligence.  One who reasons is limited when rejecting ANY possibility and therefore prevents themselves from discovering what may exist beyond the 5 senses.

One of the most hypocritical errors of science is to begin with an assumption that excludes the existence of God, because theories supporting their assumption will NEVER answer all the questions left upon the table.  If we really want to discover the truth about anything, then we must allow ALL possibilities lest we prevent ourselves from being the victims of our own shortsighted assumptions.

Perhaps we can define God in a manner that helps to answer more questions than either of the 2 myopic arguments can provide. (see 21st Century God)