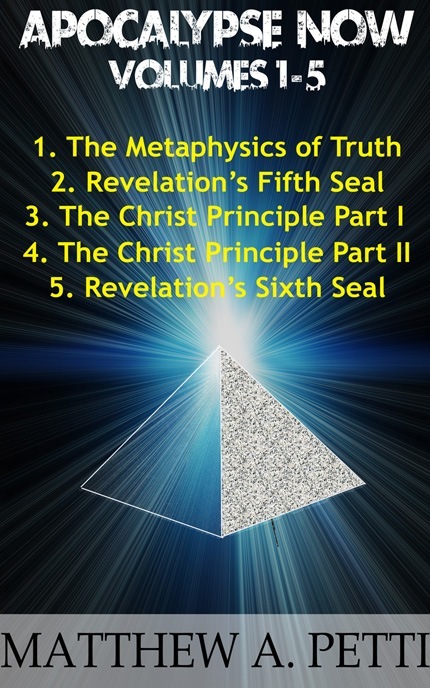 Apocalypse, translated literally from Greek, is a disclosure of knowledge, hidden from humanity in an era dominated by falsehood and misconception, i.e., a lifting of the veil or revelation, although this sense did not enter English until the 14th century. Today, it is erroneously used to depict terror and end-time scenarios.

﻿In this compelling and provocative 5-Volume series readers will understand the Metaphysics of Truth, which is ﻿the key to Revelation’s cryptic message: We will get to the Truth either from the harsh experiences that enlighten us through the insights of our wisdom.

This is examined more closely in the first Volume of the series where we discover three principles that help us to understand the nature of Truth itself.

1. The inseparable bond between past and future is the cause and effect of our beliefs and the choices influenced by them

2. Truth is immutable and can never change - only our perceptions change

3. The Truth is ALWAYS trying to reveal itself to us in our physical realm.

Discover a NEW and powerful meaning to the Four Horsemen of the Apocalypse, which opens a hidden door to new explanations for ancient mysteries. The secret to Revelation's cryptic message lies in the misconceptions of our past and their future exploits.

Understand the destiny of our souls and the hereafter in Volume 2. Closer examination of key ancient biblical scriptures reveals the hierarchy of being and a previous Super Society on earth. From this we see the flood story as our own myopic misinterpretation.

Read Volumes 3 and 4 to discover the hidden meaning to Christ's ministry and how the currently imbued perception of Christ is paramount in the confusions that will present themselves in the FINAL CONFLICT.

The secrets to the prophesized event of Revelations' Sixth Seal serve as testament to the Metaphysics of Truth in Volume 5.  The event depicted is exactly what the Mayans were predicting. Nobody knows when this event will happen, but it will earmark the beginning to upheaval, terror and deception in the final days.